Gulsehir is situated on the southern bank of the Red River and was called Arapsun back in ancient times. Later, during Turkish times it was named as Gulsehir which translates to Rose City. The ottoman Grand Vezier Karavezir Mehmet Seyyid Pasha did similar things in Gulsehir as Damat Ibrahim Pasha did in Nevsehir and both men built complex with a mosque, madrasa, and fountain. 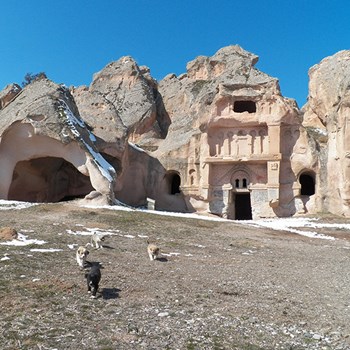 10 miles northeast of Nevsehir, you'll come to a deserted cave-village with rock cut dwellings and chapels. Locals just recently named it Aciksaray. The village is remarkable for its facades and unusual land formations which are some resembling huge mushrooms, trees, creatures and even human faces.

This small settlement can be dated back to the 10th or 11th centuries and covers an area of one square kilometer. There are eight complexes located in a circular region, forming three-sided courtyards. Each complex has it's own decorative facade on the front side that faces into a round courtyard with the building at its center.

The first recognizable-looking building in Aciksaray has one the most elaborate facades in Cappadocia. The asymmetric buildings have two rooms separated by a rectangular room and includes an intricate cross carving on the inside wall at ground level. Each of the heads is missing, but there are four headless figures carved into each arm of the cross symbolizing a bull which is regarded as sacred to both Neolithic people and Hittites.

When entering Gulsehir, you will be impressed with the imposing two floor church of St. Jean, which houses church, wine cellar, graves on the lower floor. The upper floor has an amazing church decorated with Biblical scenes and according to an inscription in the apse, it was built in 1212. 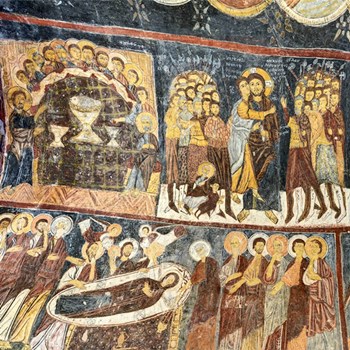 The lower church is built to the shape of a cross and consists of one apse. The barrel-vaulted arms are central to this configuration and the dome has collapsed. Animals, geometric shapes and images of crucifixes adorn the church in bright red paint.

The church in the upper floor has one apse and is barrel-vaulted. Most of the frescoes are black from soot, but the well-preserved ones were salvaged by Ridvan Isler in 1995 during a restoration project.

Frescoes depicting scenes from the life of Jesus and the Bible are in the form of reliefs within the borders. Yellow and brown have been used on a black background. On the niche vault, floral patterns were used. On the west and south walls can be found frescoes related to Last Judgement motifs, which is rare for Cappadocian churches.

Scenes of the St. Jean Church: Deesis on the apse, on its front the Annunciation, below that are bird designs, on the barrel vault portraits of saints in medallions, on the south wing of the vault the Last Supper, Betrayal by Judas, Baptism, below Koimesis (Falling Asleep of Mother Mary), on the north wings of the vault Descent from the Cross, Women at the Tomb, Anastasis, on the West and South walls the Last Judgement.