Gülbahar Hatun Mosque, built by the Ottoman Sultan Yavuz Sultan Selim on behalf of his mother Gülbahar Hatun, was completed in Trabzon in 1514.

The Gülbahar Hatun Mosque formed a complex with the Madrasa, Imaret, Mektep and Tomb. The others have been demolished and only the mausoleum erected by Yavuz Sultan Selim has survived in memory of his mother. It was built in the first quarter of the 16th century (1514) when it was then situated within a large complex that also included schools, soup kitchens and bath structures. 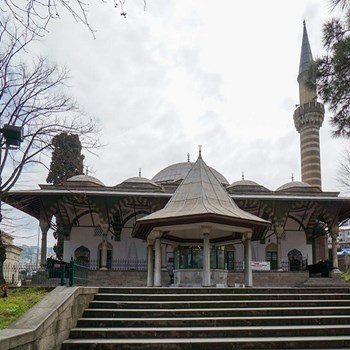 Like many other foundations built by this valued Ottoman woman, who is understood to have had other structures erected for the betterment of her community service efforts, the remaining buildings in this complex were not preserved as well.

The mosque consists of a five-section narthex, followed by a harem area with one large dome and an eastern/western zawiya. The capitals on the marble columns in the narthex are stylized lozenge motifs. The mihrab (niche) is made of marble, as well as the mimber (pulpit) of the mosque, which features a muqarnas cassette and vegetation decorations.

The inscriptions in the entrance gate of this mosque state that it was repaired in 1885; the inside, decorated beautifully must belong to these years as well. It is one of Trabzon's famous mosques and is also a meeting point for the people here.