Bursa Green Mosque was built by prominent architect Hacı Ivaz Pasha at the request of Ottoman Sultan Celebi Mehmet between 1415 and 1419 years in Bursa, Turkey. Ornamentations and handiworks were made by period painters Haci Ali and Ilyas Ali. Famous artist Mehmet Mecnun furnished this magnificent mosque with splendid tiles too. Green Mosque is composed of a mausoleum, madrasah and Turkish Baths.

The mihrab in the Green mosque is a brilliant example of tile art. The tiles are bluish green and decorated with turquoise ornaments. The name of the mosque 'Green' is actually coming from this mihrab. One of the most notable features in the Green Mosque is its tile mosaics. The muezzin's pulpit and Sultan's dais are decorated with exquisite tiles as well.

The Green Mosque was intentionally built as a reverse T-plan and was made with marble in the facades. Within this mosque, reside four adorned windows, including two mihrabs and four niches with railings where incomplete scriptures are engraved on them around the center of each window. The interesting architecture is among one of Bursa's most beautiful mosques due to its beauty masqueraded by ornamental stonework. 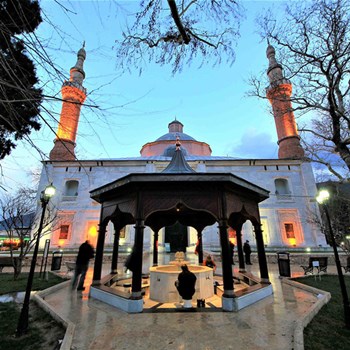 The stalactite gateway of the mosque was completed in three years and it has a monumental sight. You can get information about the building of mosque from the inscription upon that gateway which is 2-3 meters long. There are two Byzantine columns inside this vestibule. This vestibule opens to side rooms at the eastern and western parts, which are groined vaulted, with low entrances opening to the middle chamber.

The masterpiece of the mosque with a tile-adorned mihrab painting portraying geometric patterns. The iron accents and doors, windows, and cabinets were all expertly crafted as well. Since the Green Mosque has an unfinished construction, it is believed to also be used for meetings by various officials at some point in its history. These may have been due to sudden death of the Sultan or because new power was being executed in Istanbul during this time period.

Sultan Çelebi Mehmet established the Green Tomb in 1421 and it overlooks the Green Mosque. Skilful architect Haci Ivaz Pasha is responsible for its architectural accomplishment, making it a prime example of Ottoman architecture.

One of the most important mausoleums in Bursa is known as Green due to its green tiles. The tomb faces an octagonal design with a burial vault--the lowest floor has a Seljuk-style dome. The eight compartments have magnificent windows that evoke an image of heaven above with verses from the Koran and Prophet Mohammad’s deeds on their window pediments made from bullet-shaped tiles.

The mihrab in the extraordinary tile-work of this tomb fascinates people today, so it is regarded as an artistic masterpiece. In the middle of this octagonal green tomb are the many sarcophagi corresponding to Çelebi Sultan Mehmet, his sons and daughters. Also poems written on white, blue, yellow and navy tiles adorn this tomb.