The Great Mosque of DiyarbakırPlaces to Visit in Diyarbakir

The Great Mosque of Diyarbakır

The Great Mosque of Diyarbakır is the oldest and one of the most significant mosques in Anatolia. Following the Muslim capture of Diyarbakır in 639, a church in the city was used in part as a temporary mosque. According to an inscription on site, Seljuk Sultan Malikshah ordered the local governor to rebuild this mosque sometime between 1091-1097 CE (484 AH). The natural disasters and building campaigns of later rulers led to countless changes that resulted in the current form of the mosque.

The Diyarbakır Mosque was built with a rectangular courtyard measuring 63 x 30 meters. It is bounded on the east and west sides by an arcade, on the north side by structures of later date, and on the south side by a single-aisled prayer hall. A large public space paved with stone now adjoins this portal of the mosque as well as its former entrance door. 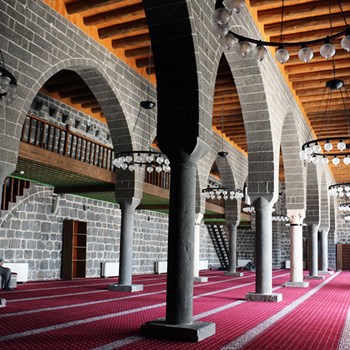 Several of the features of the Diyarbakır mosque bear an unmistakable resemblance to Damascus' Umayyad Mosque which was constructed over fifty years earlier. The proportions of both prayer halls are remarkably similar and so are their entrances and layouts. Considering Ancient Damascus' status as one of Islam's earliest mosques, it is no surprise that its design sparked dozens more copies.

A fire and earthquake in 1115/509 AH occasioned renovations to the mosque. Inscriptions dated 1117-1118/511 AH on the west side of the courtyard and an inscription dated 1162/557 AH on the east side indicate dates for a number of these renovations.

The mosque was constructed using both local basalt blocks and parts of Byzantine buildings that were reused. Features including antique columns, capitals with vine scroll ornamentation and fragments of Greek inscriptions reveal the use spolia in this area.

The octagonal ablutions fountain in the center of the courtyard was constructed in 1890.The Ulu Mosque, the oldest mosque in Anatolia, is still a worth monument with two theology schools and other nearby structures.