The Grand (Ulu) Mosque & Jesus WellPlaces to Visit in Sanliurfa

The Grand (Ulu) Mosque is the oldest mosque located in the city center of Urfa province. The Grand Mosque was originally a synagogue that was turned into the Church of St. Stephen when it came under the jurisdiction of Bishop Rabula between A.D. 435 and 436. In 1170-1175, Nurettin Zengi converted this church into a mosque and it is used as a mosque after then. 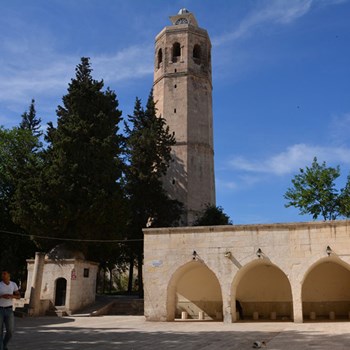 The mosque is inside the multi-pedestal mosques group in Anatolia and has a rectangular construction plan, with parallel three rows of diagonal vaults at one side to show Mecca. The last congregation location on ranks that open up onto a fourteen pointed arched courtyard was initially used at the Şanlıurfa Ulu Mosque. Nowadays, octagonal bell tower serves as the minaret for this structure.

According to a popular legend, the handkerchief that Jesus sent to King Abgar with his Apostle Thomas was left in this well. As such, people believe that water from the well inside of the mosque cures illnesses. King Abgar and his kingdom, Kingdom of Edessa, is accepted as the first kingdom accepting Christianity. To celebrate this, they sent messengers to Jesus to honor their country with a visit. He could not come, but according to the legend, he sent his handkerchief with Apostle Thomas. When the king opened the handkerchief, he saw Jesus's face in the napkin and thinking that his face should give health to everyone, he threw this handkerchief to the well. It is believed that this well in the mosque, previously a church, is the one where the handkerchief was thrown.

The minaret was transformed into a clock tower by adding an analog clock during the Republic period. The minaret also serves as Urfa's only clock tower today. The northwestern part of the mosque courtyard, which is surrounded by thick walls belonging to the church before it was a mosque, is a cemetery.