The Grand Mosque (Ulu Camii)Places to Visit in Erzurum

The Grand Mosque of Erzurum is a historic mosque in Erzurum, Turkey. It is also called "Atabey Mosque" because the Saltukids were referred to as the 'Atabey'. The mosque was built by Nasreddin Aslan Mehmed, the Emir of Saltuk, in 1179. The square-shaped building can house up to 10,000 worshippers on Friday (Juma) prayers and sacred nights. 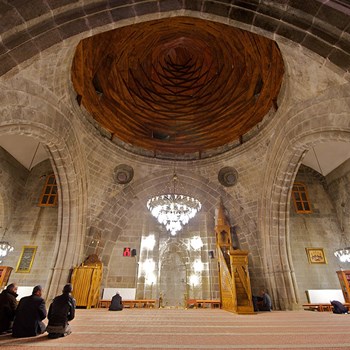 The mosque has been restored five times according to the inscriptions. Each repair job that came in contact with the old dome and vaulting system resulted in partial changes, but some portions of the mosque were demolished and rebuilt over time along with an assortment of architecture styles. A large section of the central aisle is left from the original Saltukid mosque, while a portion of qibla wall still stand after about 800 years.

The mosque is rectangular in shape, was built about 41 meters x 44 meters with a main entrance on the north side of the building. The two doors on the east façade illuminate bright interior spaces which are arranged symmetrically around windows.

The minaret, which is attached to the mosque's northwest corner and accessed through steps inside the mosque, begins at top of the wall.

The mosque is comprised of cut stone, with timber used in the construct of the domes. The minaret shaft is composed of bricks. Their interior is decorated with geometric motifs that are common to twelfth century mosques. The wide rectangular frame of the simple stalactite mihrab niche is carved with a braided pattern made up of intersecting octagons.