Gomeda Valley is located in the west of Mustafapaşa town of Ürgüp district of Nevşehir. It starts at Ayvali village and proceeds to end on the highway that crosses between Ürgüp and Mustafapaşa.

The Gomeda Valley is about 6 km in length and a combination of Gomeda and Üzengi valleys. The valley doesn't see many tourist groups because it retains its virgin atmosphere, but those who visit these valleys with multi-level dovecotes find themselves enchanted. Gomeda comes from the historical remains at the entrance; Üzengi comes from the stream in this Valley. Beginning south of Ortahisar, the Uzengi River runs along the Ürgüp Valley until it meets with Damsa Dam. Alongside the water are picnic areas that provide a scenic spot and have mineral springs for people to take in. The walk through Ürgüp follows alongside the river. 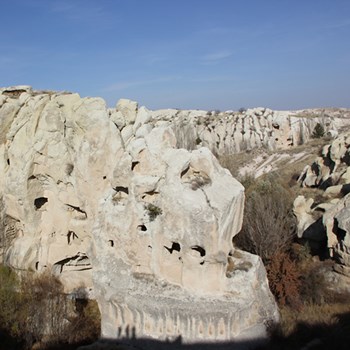 Travelers walking in the Gomeda Valley will come across famed dovecotes, and many have both remarkable as well as frightening views. Some housing dozens or even hundreds of birds, these pigeons continue to visit during the summer months. People in the area still use dovecote's to obtain fertilizer. Each designs is different, with some made of stone and others are more like art works than a practical object.

There has long been a smaller number of visitors to the Gomeda Valley due in part to its lack of fairy chimneys. This valley first attracted inhabitants from Christian community. It is also thought that this valley was once home to an enormous settlement with two churches, two necropoles and one underground city, which housed up to 600 households.

Walking through the Gomeda Valley, you encounter a collection of historically significant sights. At Alakara and St Basilios Church, frescoes compete for your attention with their decoratively painted walls. The Underground City is one of the sites that inspire curiosity about its past.

The Alakara Church is visible at the beginning of our walk through the valley. This church, which was built in Roman times, can be seen as a ruin today. You can still see the depictions of Jesus, his 12 apostles and angels in the apse frescoes; depictions of saints are also found on the arches.

Saint Basil or Basileios church, which has a rectangular plan with two interior naves, is one of the rare buildings that was constructed during the Byzantine Iconoclastic period. On the slanting ceiling there is a large cross decorated with floral and geometric motifs. On the south wall, located in the east and facing the Gomeda Valley, someone inscribed three Maltese crosses beside geometric and herbal designs. Instead of depicting who they represent, these crosses bear inscriptions for Abraham, Isaac and Jacob.