Golludag is a sheltered city at an altitude of 2,172 meters in the north part of Niğde province. The village of Kömürcü is located close to Golludag and the distance between Nigde and Golludag is about 60 km.

The ancient settlement of Golludag was excavated in 1934 by Remzi Oguz Arık and later discovered in 1968-69 by Burhan Tezcan. Wulf Schirmer conducted further research between 1992 and 1998. The ruins date to the end of the 8th century BC, and are located within a defensive wall next to a crater lake of an inactive volcano. Multiple building groups can be seen within the confines of the walls that surrounds them. 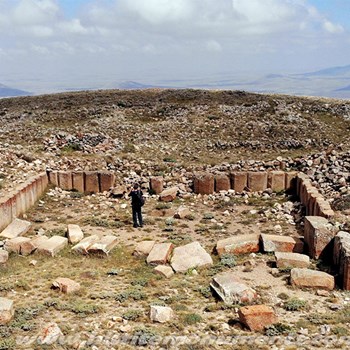 One of the Hittite city states that formed in Anatolia after the collapse of the empire is Tabal. In this period, Golludag was one of the cities within its borders. Golludag was a Late-Hittite city that was surrounded by ramparts during the 8th-7th centuries B.C.

The largest building is around 112 x 228 meters, and it occupies the highest location. Two large double portal lions, two portal lions, two sphinxes and two column bases decorated with lion images near the external and internal gates of its southern entrance were discovered while excavations. The lion sculptures on the outer gate are made of white andesite. The better-preserved west wing sculptures stand 1.5 meter high and 2 meters long.

Two single portal lions were also found near the gate area. The more well-preserved of the two is 0.88 meter high and 1 meter long, currently in Nigde Museum. A sphinx was also found by side of inner gate, as well as one broken lion head near the inner city gate and another around southern city gates.