Gök Madrasah, also known as Sahibiye Medresesi, is located in Sivas city center and it was built in 13th-century.

The Gök Madrasah was built in 1271 by Sahip Ata Fahreddin Ali, one of the influential viziers during the reign of Gıyaseddin Keyhüsrev III in Anatolian Seljuks. The building is called by two names: Sahibiye and Gök Madrasah. Sahibiye comes from "Sahip Ata"—so named because he ordered the madrasahs construction—while Gök or "Sky-blue" refers to its sky blue tile mosaics which dominate much of its exterior surface. 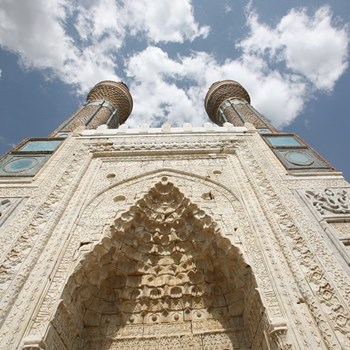 It has a plan composed of an outdoor courtyard, two floors, and four alcoves. The upper floor in the madrasah is used during summer months and the lower floor used during winter months.

Gök Madrasah is one of the most distinguished and monumental examples of Seljuk architecture. The integration of architectural details and ornamental designs can be seen in this 13th century masterpiece, which also a marble baroque crown gate.An embossed leaf figure is seen on the upper corner stones of the Gök Madrasah of Sivas. The inner part of the leaf is full of animal heads. It is assumed that such ornaments composed of the heads of ram, pig, lion, snake, dragon, and elephant indicate the zodiac signs.

The inclusion of these animals in the Twelve-Animal Turkish Calendar also demonstrates that Turks from Central Asia have preserved their culture in this art. The tree, eagle and other bird figures all have meanings both liturgical and symbolic in Seljuk art.

With 9 other same period madrasahs in Turkey, Gok Madrasah has been added to the Tentative List of UNESCO in 2014 with the title of "Anatolian Seljuks Madrasahs".