Gok MadrasahPlaces to Visit in Tokat

The Gök Madrasah is a 13th century Anatolian Seljuk Madrasah in Tokat. It used to serve as an archaeological and ethnographical museum but the collection has been moved to another location within the bedesten area now. 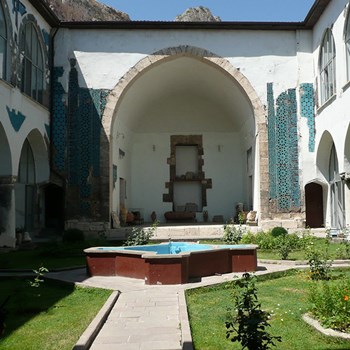 The Gök Madrasah has no inscription, so the exact date of construction is unknown. It is thought that it was built by Müineddin Pervane Süleyman in 1277. The building was a Seljuk Turkish style house with two floors and two iwans . Additionally, there was an open courtyard and portico. Ornamentation consisting of geometric and herbal decorations on the stone crown door were seen in rooms that had two-colored designations for walls.

The exterior of the courtyard contains khaki colored tiles lining the upper floor cloisters. The main iwan is bordered by an Ayet'el Kürsi border, with tile designs in turquoise and irregularly shaped branches laid on its ground.

The building, which was used as a madrasah, bimarhane and one room as a tomb until the 19th century, was later used as a hospital and immigrant shelter. It is commonly called "Gökmedrese", "Pervane Madrasa" and "Forty Girls Madrasa" among locals.