Göğceli or Gökçeli Mosque is located in Carsamba town of Samsun, about 40km far from the city center. The Göğceli Mosque, which is accepted as the oldest surviving wooden mosque within Turkish borders, is located in Çay Mahallesi Göğceli Cemetery. The fact has been ascertained by architectural studies conducted on its design and construction style.

Scientists outside of the country have carried out tests on wooden samples taken from the building, revealing that the mosque likely dates back to 1206 and was repaired in 1335. They also found that only wrought-iron nails were used in connection to beams extending towards portico sections rather than wood plugs. 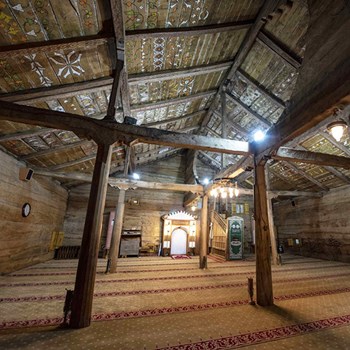 Trees such as elm, ash, chestnut were used in many parts of the building such as poles on the walls, pole heads, beams, rafters and roof supports. The planks used as a single piece on the walls are approximately 15-18 cm thick and 50-70 cm wide - approximately 12 to 20 meters in length.

The depth at the bottom has been opened to prevent ventilation. This prevents moisture and decay of the structure. The interior decorations have also faded and fallen from their positions on the building, due in part to its age.

The northern section is slightly curved with an arched ceiling while another roof is three-shouldered and covered by Turkish style tiles; moreover, this section of the building underwent a restoration process in 2007 that confirmed authenticity of the preservation system used during construction time as well as important features such as grafts (made using rafters), hand-drawn embroidery (in which madder was applied) on roof boards.

Artisans who built the mosque used different color schemes, patterns, and designs on almost every piece they created. What sets this artwork apart is that most of it was done using herbs and plants native to the region.

The sculpture stonework in the sanctuary has ornaments that are either stylized arches, curvy branches and flowers, or snake-like curved branch extensions. These decorations differ from one another in quality with those comprising of odd ocher shapes on rafters being of lesser quality than other ornaments. Other carvings present on capitals and consoles in the sanctuary sport poorer craftsmanship than usual as they look like rough woodwork colored by dark paint.