Gevher Nesibe Hospital and Madrasah was built by Giyaseddin Keykhusrev I in 1206. It is dedicated to Gevher Nesib Sultan, daughter of Kilicharslan II, a Seljuk emperor who came to power in 1105. It still stands today as the medical history museum for Kayseri's Faculty of Medicine.

Gevher Nesibe was very ill and when Sultan Keykhusrev I visited her and made a request if she has a desire of making a will, upon this Gevher said "I wish you would use my property to build a hospital. Sick people are to be treated free of charge, even those who cannot afford the cost." This hospital bearing her name will help treat those in need. Giyaseddin Keykhusrev began building this hospital in 1204, finishing it within 2 years and putting the building into service in 1206. Later on, the medical madrasah to the east of darussifa was built by Izzettin Keykaus from 1210-1214. 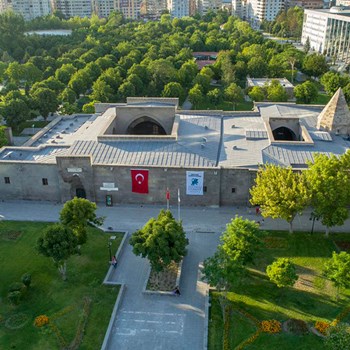 Sharing walls with the madrasah, the darussifa building has a square courtyard in its center and is 42.3 x 41.40 meters large. There are four small iwans and 23 rooms inside and 5 great halls.

There is a special unit in the hospital served as a way to care for mental patients, who would typically be treated with suggestions in between water therapy and musical strains.

As with the other hospitals at the time of Gevher Nesibe, the hospital had accepted treatments from Islamic-Arabic medicine. One important characteristic of this hospital was having a separate section for psychopathic patients.

The east side of the hospital had two rooms. The inner room was for making preparations for drugs. Historians believe that the Seljuks were aware of photosensitivity. More specifically, they knew about the sensitivity to light associated with drugs and treatment practices.

At the very end there was a hammam (known as Turkish bath) and evidence of copper pipes which hint at central heating. They also had a head physician, 2 internists, at least two surgeons and junior hospital doctors as well as a pharmacist.

The first known public medical school, Darüssifa, was established 13th century in Anatolia. 350 years before its European counterpart, it is also one of the world's first schools to incorporate music therapy and is a UNESCO World Heritage Site.