Germanicia, an ancient city beneath the modern one of Kahramanmaraş in southern Turkey, played host to many civilisations during a lengthy and prestigious lifetime. Hittites, Urartians, Assyrians, Persians, Macedonians and Seleucans have all ruled this important place due to it being on so many major trade routes.

Both the Spice and Silk Roads pass through here. The city's final name, Germanicia Caesarea, was likely given in honor of Gaius Caesar Augustus Germanicus by the Romans who conquered and occupied this fertile region for its' geopolitical importance. 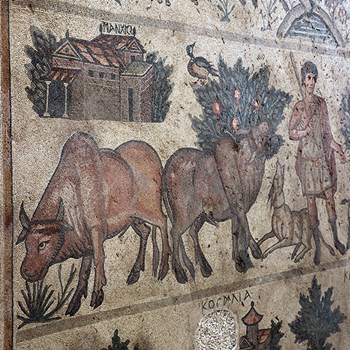 It is known that Germanicia was an important episcopal city in the Byzantine period and many bishops such as Eudoxius, Nestorius, Suras, Salamanes (Salamias), Anaphora of Thomas who converted to Christianity from Judaism and John III were all added "Germanikeia" Agnomens.

The Roman era had rich culture. Their mastering of art influenced everything from the architecture to home furniture and bath houses. One of the most pervasive signs in their culture was elaborate, detailed artwork found on floor mosaics.

The colorful mosaics of Germanicia are not only limited to the villas of the elite, but they can be found in palaces, temples, baths, agoras and smaller homes. Compared to Ephesus and Zeugma mosaics, Germenicia mosaics contain extra-thin and small tiles for a more intricate detail which makes them more valuable.

Mosaics from the ancient city of Germenicia have been unearthed in Bağlarbaşı and Dulkadiroğlu districts. Found only by archaeological excavations, they will be removed safely to a secure storage place and studied for their themes. These mosaics come from mythological tales as well as depicting daily life during Late Roman Periods.

The Germanicia examples are unusual for Late Roman mosaics in that they depict mythological scenes. But we also find floral graphic patterns, as well as scenes of daily life and architectural representations. We see what the people of the day were wearing, what they ate and drank, and the animals that formed part of their world.

Many mosaics were made using a high level of skill and certain mosaics are more realistic than others. A good example of this is the image of a rooster, which is one of the most detailed pieces created in that era.