Located in the center of the city of Tokat, Garipler Mosque is also known as the Green Minaret because its minaret has green glazed bricks. It was built after the victory at Manzikert in 1071 and is therefore considered to be the oldest mosque in Anatolia.

According to historical documents, it is understood that Garipler Mosque was built by Danishmend Gazi in 1074. It was repaired many times during the Seljuk, Ilkhanid and Ottoman periods. The building was converted from a Christian church into a mosque. 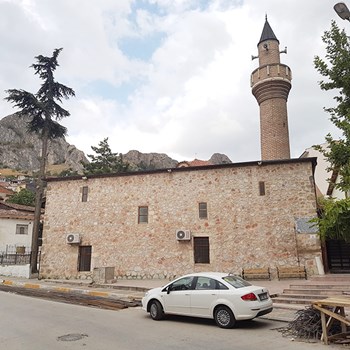 The square mosque, which has side walls of approximately 20 meters in length, lacks any meaningful architectural style with its thick high wall and a closed mass. In this form, the plan shows central character; The support system that determines the middle space is separated from the side spaces by four piers and four columns.

The substructure of the supporting system is constructed out of square slabs and has pendentives at the top. The domed middle space around which all other spaces are built is covered in tiles to give the exterior a more archaic appearance. Spaces around this central domed area consist of vaulted recesses, while still opening outward into vault-covered walls as well.

The adjacent north wall rests on a polygonal drum that attaches to the outside of the stone gargoyles below which are most likely from an earthen roof covering for this dome. The projection has rows of rectangular cut stones, where there was once soil covering but now serves as an entrance way due to more modern construction atop the site today.

The minaret is the most original element of the Danishmend era, seen through its green glazed bricks on a honeycomb part and all.