Firtina River and BridgesPlaces to Visit in Rize

There are many streams in the Eastern Black Sea Region, but one of the most iconic is Fırtına River or Storm Creek. 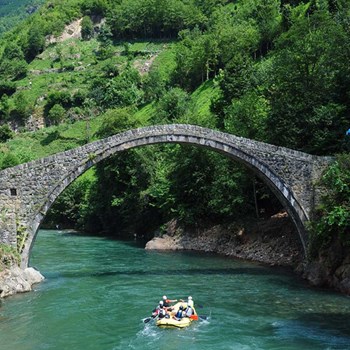 It was formed by merging two other smaller streams and has been used for centuries as a transportation route by tea traders. Mother Nature has not left this place untouched, either – it’s a beautiful destination for anyone looking to raft or enjoy some sport fishing with their children.

The Fırtına River begins in the Kaçkar Mountains of Rize Province and eventually streams into the Black Sea, passing by Çamlıhemşin and Ardeşen. The river is 68 km long.

There are more than 20 well-preserved Ottoman-era bridges over the Fırtına Deresi. These bridges date from the 18th and 19th centuries, however some may be older. It is believed that they were built by masons in the community who received direction from Ottoman authorities. Some of the standing bridges are Camlihemsin, Kaptanpasa, Buzlupinar, Koprukoy, Senyuva, Mikron and Ardesen Bridges.