Firfirli Mosque or 12 Apostles Church is located about 400 meters far from the famous Pool of Abraham in Sanliurfa city center and it attracts people.

The building located on Vali Fuat Bey Street was originally constructed as a church and recorded as 12 Disciples Church. In Ottoman Era, because of the windmill wings on it, the Church was called "Frilly Church" by locals. Every time the wind blows, the windmill turns with a 'frizz' sound. The people, who became familiar with the sound in time, now call the mosque "Fırfırlı" with the Urfa dialect, meaning literally 'Frilly'. 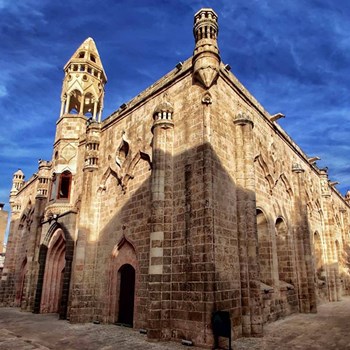 According to history books, the "Holy Cross of Varak" which was very important for Armenian Christianity and was in the Varak Church in Van City was later brought to Urfa and displayed in this church around 1092. Even though we do not know exactly when the church was constructed, it must have been before this time for sure.

The building is in a three-naved basilica plan. The middle nave has a dome with an impressive squinch, while the side naves are covered with cross vaults. There are twenty-four windows on the pulley of the middle nave and basalt stone was used throughout construction for domes and vaults, columns with corniches, and exterior facades decorated with half columns.

The building, which was used as a place of worship by Armenians, turns into a prison after, many years later. Prisoners carved notches on the walls to keep track of time spent there and to mark special moments- it appears that some prisoners had left their names in these marks.

The inscription above the mihrab confirms that this church was turned into a mosque in 1956. One of the windows that was originally situated inside an apse became a mihrab when it got converted into a mosque.