The Hittite Empire relief measures 1.3 meters in height by 3.2 meters in width and was created during the 13th century BC; it faces northwest towards Mount Erciyes. 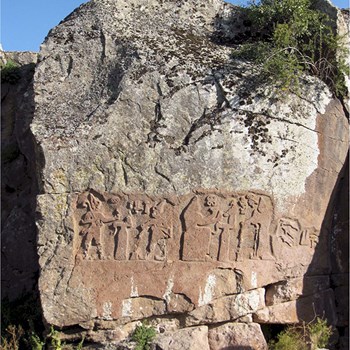 The left section shows the Hittite king Hattusili III (right) making an offering to the weather god, pouring water from a kind of beaked flagon into a vessel on the ground. Between them there is an altar like structure with a grooved, conical item on top which probably offers some type of bread and both figures are wearing pointed hats to symbolize their divinity.

The weather god holds a crook in his hands. In front of each of their heads are hieroglyphic symbols, naming the depicted individuals. This image was probably made after Hattusili's death in the reign of his son and successor Tudhaliya IV according to Hittite custom; kings were considered divine after they had died.

In the middle of the scene, his wife (Tawannanna Puduhepa) is seen making a libation to the Sun goddess Hebat. There is an altar between her and Tawananna, as well as what might be a bird-shaped vessel on top of it. The design becomes rougher in the rightmost part of the wall; probably this section was unfinished.

The third part of the relief consists of Luwian hieroglyphs. They continue the description of the queen which begins beside her head, "Daughter of the land of Kizzuwatna, beloved by the divine."

You can see a concrete copy of the relief at the Kayseri Museum, as well as witness a plaster cast at the Pergamon museum in Berlin.