Fertek Church is located in Fertek Village, which is very close to Nigde city center. The church has been built by Haci Nicola and it was opened for prayers in 1837. There is an inscription in Karamanli Turkish on the facade of the narthex and the date can easily be read as 1837.

The church is a three-aisle basilica with yellowish cut stone and basalt walls. There are round "U" shaped narthex at the east, and columns inside are also circular. The woodwork on narthex ceilings is interesting, including floor painting and carved column capitals in the entranceway. Inside, the five central pillars on upper level support additional 28 small columns. 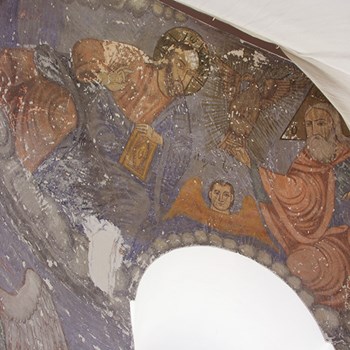 The ceiling is vaulted and decorated with hand-drawn designs. There are fresco remains on the left as you exit to the upper floor. The paintings are really intact and can still be observed even though it is covered by curtains. The church has been converted into a mosque in 1924, after the population exchange between Greece and Turkey had happened.

The pulpit and mihrab have been added to the interior after the conversion of the building from church to mosque. The apses are separated from the main space with a wall, and has windows on the sides that provide access to other spaces.

There is a niche in the left apse. From the outside, the main space, corner spaces and apses are covered with a double chamfered roof. The galleries in the north-south direction are covered with an upper roof; all of which have simple capitals on their pillars.