The name of the neighborhood used to be the city center of Ordu, but after a fire that left everything burned down and devastated most of the city, it was reformatted in today's city center and this area started to be called as 'Eskipazar' meaning 'Old Bazaar'.

Eskipazar Mosque has a rectangular plan. It was built in 1380 by Hacıemirogullari, and the mosque was repaired around 1781 after an earthquake damage it. The entrance gate and portal were preserved from the old mosque. 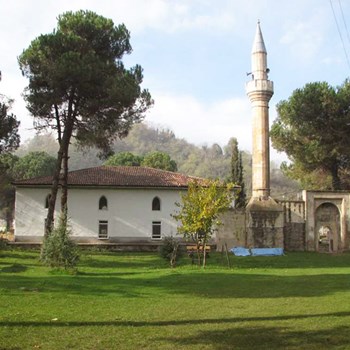 The current minaret was built on the base of the old minaret in 1877 and was repaired by the Foundations Organization in 1994. The window door and pulpit are good examples of wood carving, which can be found at Ankara Ethnography Museum. There are two baths available to visitors’ sight as well.

The Great Bath is located on the south side of the mosque and dates back to the sixteenth century. It consists of three parts: cold, warm, and hot water. The outside of the bath is made of rubble stone while the inside is made with smooth chipped stone. Another notable feature is that it has a dome and vault cover in its architecture which was common for this era.

A small hamam: It's located northeast of the mosque and it includes a water reservoir in its single space. It is estimated that this was built in 18th century.