Eskipazar - Hadrianopolis in Paphlagonia was a city in southwestern Asia Minor about 3km west of modern Eskipazar town of Karabuk Province. It was inhabited from at least the 1st century BC to the 8th century AD and was named after Hadrian, the Roman emperor, in the 2nd century AD.

Hadrianapolis was established in the late Hellenistic, Roman and early Byzantine periods. When Emperor Theodosius I (347-395) created a new province called Honorias from Paphlagonia and Bithynia, it became known as Hadrianopolis in Honorias, the name by which it is now known - largely due to its Christian diocese, listed among current titular sees - in the Annuario Pontificio. 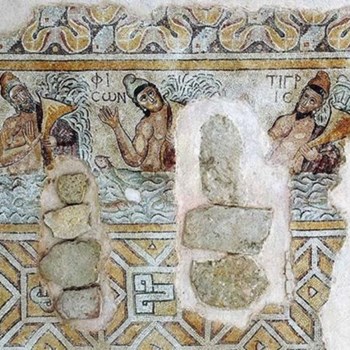 Excavation work for the ancient city began in 2003 and has uncovered 14 public buildings. These include two baths, two churches, a defense structure, rock tombs, a theater, an arched and domed structure as well as four other large-scale structures located on the sanctuary that have not been identified. A villa is also listed among the excavated sites as well as some religious buildings.

The church floors are decorated with mosaics and have images of the rivers of Gihon, Pishon, Tigris, Euphrates which are mentioned in the Bible. Various animals are also depicted in the mosaic of ancient city which has been likened to the ancient city of Zeugma. One of Anatolia’s earliest churches was found at Hadrianopolis.

In December 2019, archaeologists found an 1800-year-old limestone slab with a female silhouette, which is most likely that of Demeter. It had the inscription "Herakleides, son of Glaukos". The slab has a figure of a woman on it wearing a traditional dress, holding ears of wheat in her right hand and wearing a belt with a snake on her waist. Most probably, this is the goddess of the harvest and agriculture Demeter.