Eski Gümüşler Monastery is a Byzantine-era cave monastery in the town of Gümüşler, about 10 km away from Nigde Province.

The monastery is one of the best preserved and largest monasteries in the Cappadocia region that is carved out of a large rock. There are two types of monasteries, those with dining halls and those with courtyards that are open to the sky. The Eski Gumusler monastery is an example of the latter; an open courtyard monastery. 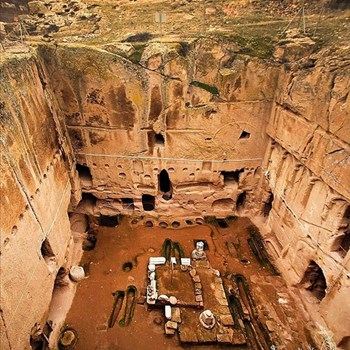 The church is the most important part of the monastery. The church consists of four closed aisles based on the Greek cross plan, and in the northern aisle there is a niche with two tombs.

The paintings are assumed to have been painted by at least three different masters. In the main apse, there are three series of paintings. The highest portrays Christ on a throne with two angels positioned to his right and symbols of the gospel writers in the foreground. Below that is an image of Deisis, or affirmation, where Mary and disciples surround Jesus. The bottom band depicts fathers of church from Basil the Great in Kayseri; Gregory of Nisa; and Gregory of Nazianzus respectively.

The north part of the cross is home to murals depicting The Annunciation, The Nativity and The Presentation at the temple with the figures of John the Baptist and Saint Stephen. These must have been painted by a second artist because of the difference in the style of the paintings from the earlier one. On the inside of the narthex, just south of the entrance door, are carvings of Mary and baby Jesus. Cast to each side are the two archangels Gabriel and Michael as executed by a third artist.

There is a scene in this church which is depicting The Virgin Mary while she is smiling and looking at you wherever you turn, just like Mona Lisa painting. Even though it is probably because of a mistake on restoration, it is still worth seeing this fresco.

There are several paintings and tapestries in the room above the narthex which showcase specific (and unusual) hunting scenes not found anywhere else in Cappadocia.

The paintings on the walls of Gümüşler Monastery are very similar in style and iconography to what can be seen in many churches around Cappadocia. It is possible to date them from the 11th-12th century A.D. by scrutinizing them with this criteria.