Erzurum CastlePlaces to Visit in Erzurum

Erzurum Castle is located in the town of Erzurum, which is in Eastern Anatolia. Though Erzurum Castle is just a few feet tall, it offers views of the mountains and townscape that are best seen with an entrance fee to climb its 12th-century minaret. 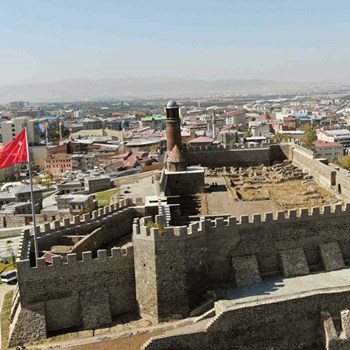 The minaret was converted to the clock tower in the 19th century and its original mechanism is still fully functional. One must climb 67 uneven steps sloping up in a circular, stony staircase then scale an extremely steep ladder—with no rest stop—to reach the top.

The Inner Castle, a 2000 meter high hill in the mountainous region which was built by Theodosius the Great in his 5th century reign. It gradually gained use as barracks until recently, when Turkish administration converted it into a museum of modern art.

The Clock Tower and Mosque are important structures inside the castle as well. The minaret which was first named Tepsi Minare became a clock tower during the Baroque Period of Ottoman Architecture. Abu'l Muzafferüdin Gazi (King from 1124-1132) built it in 1137. The small mosque, which is covered with just one large dome, had typical features of Turkish Architecture.