Located 20 km northeast of Çeşme, the ancient name of the village Ildırı was Erythrai. It is assumed that the word “Erythrai” derives from a Greek word meaning ‘red'. This explains how this word comes to be used as an epithet for a city whose soil was red. According to another assumption, the city took its name from Erythro, son of Cretan Rhadamanthes, founder of the city. 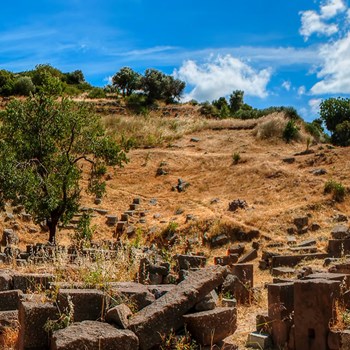 The findings of the ancient city show that there was a settlement here since the First Bronze Age. The Second Colonization period had Knopos, who was a descendant of Kadros, King of Athens, ruling the city. Vasileids then began to rule when elected by people under rule from Athens (the first colonizers), but it soon became Panionion (founded by Ionian cities) part of religious and political unity with other nearby towns.

The city, which joined the uprising of other Ionian cities against the Persian oppression and became independent in 334 BC when Alexander The Great passed through. Erythrai later became a part of Pergamon (Bergama) Kingdom after many changes were made in political power following Alexander's death.

Archeological digs at the site began in 1963 and were led by Prof. Hakkı Gültekin, followed by Ekrem Akurgal. The theater from the 3rd century BC was discovered on the northern slopes of the Acropolis, and remnants of a temple to Athena were also found.It is understood that the city was surrounded by a 5 km long wall. In the research, pottery, stone and clay figures from the 6th and 7th centuries BC were also found in acropolis.