The Leaning Minaret of Aksaray bears a striking resemblance to the world-famous Leaning Tower of Pisa in Italy. Located in the center of Aksaray on Nevşehir Street, this minaret is one other important historical artifact from Seljuk Period. It received its name because it leans 3° 11' degrees. 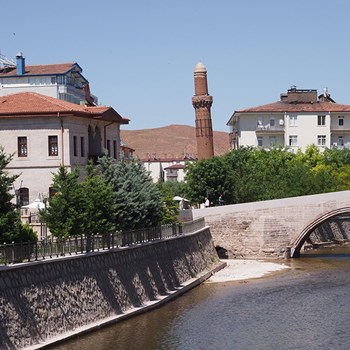 The Eğri Minaret (sometimes known as the Crimson Minaret because of its red brick) was built in 1221-1236 by master builders. At 30.6 meters high, it has 92 steps and a balcony on all four sides.

Some people have wondered whether the Egri Minaret leaned because it was towering over buildings or whether it had always been this way, but most agree that construction caused the leaning positioning.

The cylindrical tower, which is placed on a square base, has two sections separated by moulding. The lower section is covered with zig-zags and the upper section has blue and green tile mosaics. After the minaret was in danger of collapsing in 1973, steel ties were attached to it for reinforcement. A mosque was built next to this one later on.