Dulkadirli underground city, located 50 km south of Kirsehir and built by Christians in the fourth and fifth centuries, later seen as Byzantium, Seljuks and Ottoman. The entrance is tunneled with a 22 m length opening to a 30x50 meter-long interior courtyard adorned with columns out from the stone walls. 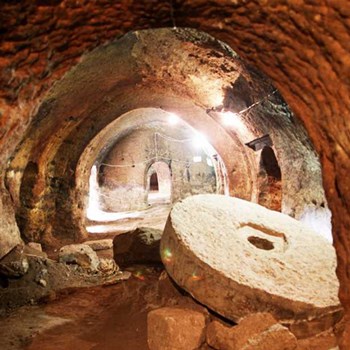 In the east, west and north front of the court there are five living rooms and eight rooms. All freely open to the outside through sixteen round arches. The only way down to the lower level is a ladder from room number five. There's also a water well in this room.

In the gallery there are two stone masses that are thought to be millstones but instead it is assumed they were used as door-closers. There is also a small millstone found in the end of the gallery, and some have guessed it was likely used by Christians who scratched inscriptions into its surface.

130 meters east of the underground city, a two-courted settlement is found. Like the Seljuk inns in general construction and plan condition, it is very different to others with its architectural features and presentation plan conditions.