The Double Minaret Madrasah, a Seljuk work that has come to represent the city of Erzurum, was most likely built in the late 13th century. It's also called the Hatuniye Madrasa--though it may have been built by Hundi Hatun, Aladdin Keykubat's daughter from his first marriage--or by Sultana Hatun of the Ilkhanid dynasty. The madrasa is likely to have been completed before the end of Seljuk power in Erzurum in 1277, following completion of the Gök Madrasa in Sivas, which was used as a model.

The Double Minaret Madrasah is the largest madrasa in Anatolia. Built in the second half of the 13th century, it was initially used as a theological school but has since also been used as a gun foundry (in 17th century) and armory (in 19th century). More recently, it has been converted to a museum which welcomes visitors today who want to see its colorful history. 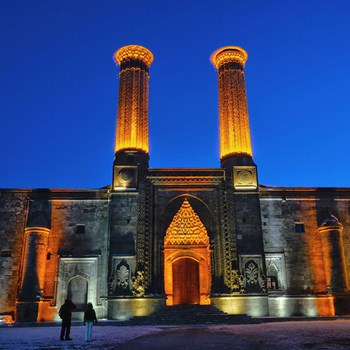 The madrasa is a 2-story, 4 iwan building, 35 by 48 meters in size. It faces north and south with the main portal facing north. A 10-sided mausoleum that is connected to the left side of the building adjoins it on its south side.The madrasa was built up against what was once eastern city wall.

The portal is decorated in rich detail. A large niched muqarnas hood tops the entryway, framed by a pointed arch and finally a large rectangular frame carved with vegetal patterns based on concentric bands of intertwining split palmette forms. The motif inhabiting the outermost band originates at its base from a vase.

The mausoleum (türbe) joined to the south end of the building can be accessed through a door in the back of the south iwan. On the exterior, it is decorated with tall blind arches defined by continuous molding. Every other face has two windows: a small one high up just below the arch, and a lower window, decorated with muqarnas vaulting.

Geometric, conical patterns encircle the entire tomb below the cornice. The roof is divided into segments and decorated with arches in low relief that are supported by a muqarna-relief cornice. The builder of this building is unknown, and its decoration remains unfinished.