The Dönenler Mosque (Dönenler Camii), built in the 14th century, is a Sufi dervish tekke. This mosque opposite of Ulu Mosque was built as the 'Semahane' of Mevlevihane, at the order of Mevlana Celaleddini Rumi. 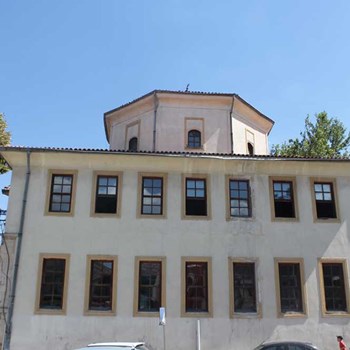 This is one the most significant examples of early Turkish architecture and displays two restorations, the semahane and dervish rooms were able to survive to this day. Today it functions as a mosque and has a quadrilateral plan. Next to it there's a small burial dome called Kütahya's Seljuks period conqueror Hazer Dinari tomb which was built under his order when Mevlana grandson Ergun Çelebi buried here in mevlevihane.

This small but interesting mosque, which rests at an altitude of 917 meters, was restored in 1812 under Sultan Mahmud II and again in 1841, under Abdülmecid I. In 1925, Mustafa Kemal Atatürk outlawed all Sufi orders and it closed. In 1959, the Dönenler Camii restoration was successfully done and became ready for worshipers.

Interior is beautiful. It contains a round prayer hall, where Sema ceremonies were performed during the day and musicians would sit on the balcony level. The site's inscription commemorating the repairs to the mosque in 19th century, Koran script around the bottom of balcony, and hand-painted designs. One particular interesting feature is oddly shaped column capitals.