You can reach Dilek Peninsula National Park from Kusadasi-Söke by highway. The park offers facility for tents as well as caravans, and there is food available on site.

This 277-square-kilometer mountainous park on the Dilek Peninsula has picturesque views and access to extensive forests, coastal wetlands, beaches for swimming, and plenty of opportunities for bird watching. 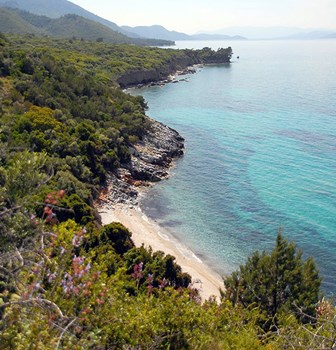 The visitor center has information for visitors, and four semicircular bays that are sandy or pebbly sit below the road. The views from pullover points to park facilities can be seen from the top of a high-security military compound at one end of the peninsula. It was there that soldiers could train their binoculars on tourists frolicking on Samos.

The first beach, İçmeler Köyü (1km from the entrance), is sandy and busy, while Aydınlık Köyü is a quieter pebble beach with occasional views of the city in the distance.

Over 1km ahead, the signposted canyon appears on the left. For a 15-kilometer walk down a forested path, Doğanbey village offers beautiful stone buildings; what is more, they have been restored by affluent newcomers as well as having cafes with restaurant service and places for guests to stay or reside at.

As you explore the ancient Hellenistic port of Karine, 6km west of Doğanbey, the path leads to a local fish restaurant. However, after this point, hikers will need to obtain a permit or be led by a licensed guide. There is also an established 25-kilometer bike track from Güzelçamlı that ends at Doğanbey Park entrance.

Dilek's third bay is Kavaklı Burun Köyü, located 1km past the entrance to the canyon. The final beach open to the public, pebbly Karasu Köyü (11km from the entrance), is also a wonderful spot for a picnic and boasts breathtaking views of Samos rising up out of the sea. If you're lucky, you might see swinging in on one dolphin or even rare Mediterranean monk seal!

All four beaches offer free wood-slat seats, which are quickly taken. There are both fold-out chairs and umbrellas available for rental.

Approximately 200 meters southeast of the park entrance, a brown sign points to Zeus Mağarası (Zeus Cave), a show cave with azure blue-colored water that is refreshing and cold in summer time and cozy during winter.