Didyma - DidymaionPlaces to Visit in Aydin

The Temple of Apollo at Didyma or Didymaion, was the fourth largest temple in the ancient Greek world. The temple's oracle, second only to that of Delphi, was important in the religious and political life of both Miletus and the greater Mediterranean world. Many rulers, such as Alexander the Great (356-323 BCE) and Diocletian (244-313 CE), visited this oracle seeking guidance from Apollo. The oracle at Didyma played a key role in initiating the Great Persecution of Christians under the Roman emperor Diocletian, and later it was converted into a Christian church. The date for this transition is unclear; some suggest that during the 5th or 6th century CE, while others argue for earlier periods.

The Didymaion was the fourth and largest temple near a natural spring, which the Greeks believed to be the source of its prophetic power. In 6th century BC, people living in nearby Miletus started building a much bigger and better temple. But that one was spoiled, either by Persian king Darius in 496 BC or Xerxes in 480 BC. Legend has it that the sacred spring stopped flowing until Alexander the Great passed through and restored its consecration in 331 BC. The first recorded pronouncements of the site were in favor of this young Macedonian king. 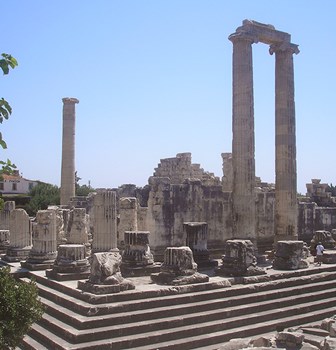 The Political & Religious Importance of the Didymaion

In the ancient world where church and state were inseparable, the Temple of Apollo at Didyma was one of many buildings that served a significant role. This temple complex was frequently used for religious festivals, sacrifices (e.g., animal offerings), votive offerings, etc. It also held significance in influencing civic statutes in Milesian law and directing public affairs as well as providing protection against enemies.

The importance of the site meant that the office of the high priest—responsible for presiding over the sanctuary—was an immensely coveted position. Elected to a one-year term, high priests were often aristocratic gentlemen of Miletus. This involved them deeply in the politics and trade of that city, and ensured their responsibility was to finance activities related to the sanctuary.One of the most prestigious positions in Miletus, this sanctuary was so crucial to the religious and political affairs of Miletus and the larger Mediterranean that numerous Roman emperors, including Trajan, Hadrian and Julian were elected to this position.