The Diyarbakir Dicle Bridge is located south of the city over the Tigris River. It is also known as the On Gözlü Köprü (Ten Arches Bridge) or Silvan Bridge. The bridge was constructed by the Marwanids, one of the emirates under Seljuk rule who between 1065-1067.

The stone bridge out of hard basalt stone was erected long ago near the structural remains of an old bridge, and it was greatly damaged by floods. It has undergone a number of repairs, such that the original construction may have been partly altered from its original state due to those repairs. 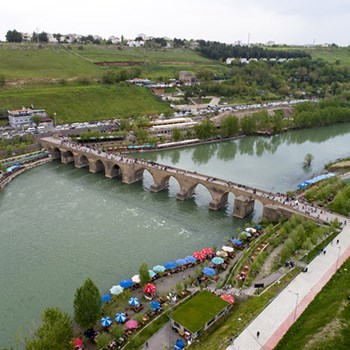 The bridge has 10 arches of different sizes and is part of the group of straight bridges. The width between the walks is also wide in some places and more narrow in other parts. Flood breakers are placed on top or near these entrances, which can be as high as the road bed. An inscription along the side shows its name, including one line created with a long band that's located midway between two parapets at either end and starts at an archway on one side of the estuary.

The bridge is south of the city, 3km (1.9miles) outside of Mardin Gate, 178meters long and 5.60wide at some parts measuring 14.70m at longest span between arches.