The Deyrülzafaran Monastery or Mor Hananyo Monastery, one of the most important places for Assyrian belief, is 5 km from Mardin and located on a hillside with an excellent view over Upper Mesopotamia.

The monastery was first built on the site of a temple in honor of the Mesopotamian sun god Shamash then converted into a citadel by the Romans. After they left, Mor Shlemon turned it back into a church that underwent periods of dept and renovations before being renamed by Bishop Mor Hananyo who brought it back to life in 793 AD after briefly going missing during its westward expansion. 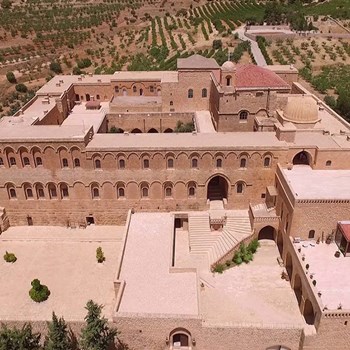 The monastery was later abandoned and re-founded by the bishop of Mardin, John. He carried out important renovations and moved the sequestered to this monastery before his death on July 12th, 1165. From 1160 until 1932, the Monastery served as the official seat of the Syriac Orthodox Church's Patriarchs. After 1932, it was moved to Homs city first and then to Damascus in 1959. The Patriarchal throne and many relics still remain in this location, which also houses tombs of various Patriarchs who lived there during that time period.

TPetrus IV was the first to introduce printing at this monastery. He died in 1895, and brought a printing machine with him from England in 1874. Monks continued utilizing several books distributed until 1969 with this machine during their work like writings for Assyrian, Arabic, Ottoman Turk, etc. Some of these books were moved to museums or libraries across Turkey while others found themselves on display in churches nearby Mardin such as Kırklar Church where you can still gaze at them and marvel at their brilliance!

Deyrülzafaran Monastery, which draws attention with domes and belted pillars as well as stone engravings both inside and out, was one of the key Assyrian Church tutelaries for many centuries.

The church services are still conducted in Aramaic, Jesus's language. To the right of the entrance there is a prayer room which used to be a temple in 2000 B.C. Above it is an old mausoleum which was once used as a medical school; its doors are carved with lions and serpents. The main chapel still retains patches of its original turquoise coat and houses 300-year-old Bible, 1000-year-old baptismal font, and 1600 years old mosaic floor.