Devrent Valley, a lesser-known cousin of the other Cappadocia valleys, is also known as Imagination Valley or Pink Valley due to its color. The valley doesn't contain cave temples like the others do, but instead features incredible lunar landscape with fairy chimneys that feel out of place and seem to belong in another world altogether. 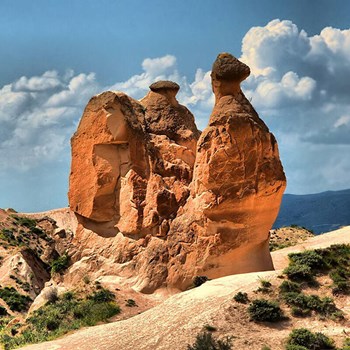 Devrent Valley is not a place that people have lived for centuries or inhabited. Seeing cave churches and chapels would be unlikely. You see an unfamiliar kind of geological voids and animal-shaped rocks suggesting something as zany as stepping into a zoo.

Some of the most commonly seen animal shapes are camel, snake, seals and dolphins. You can also find more interesting shapes based on your imagination. It is a little hard to reach the valley though. There is no local transportation to get to the valley, so you may need to rent a car or join a tour group if you want see it.