One of the country's rare examples of a wooden-pillared, earth-roofed Dengere mosque stands in village of Bölme Pınar in Burdur province. The mosque is located in the Çavdır town and built during the Seljuk and principalities period. For an unknown reason, the mosque does not have an inscription. The date 1661 is engraved in stone on one of its walls, so it is accepted as the construction date. 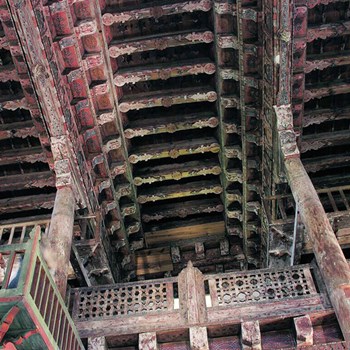 The mosque, with its minaret and fountain, is a unified whole. The square plan of the mosque is divided into three elevated pitches by four pillars; this design creates eight-sided wooden columns lining the ceiling.

Pillows, balustrades, and other details make the ceiling quite a spectacle. There are geometric painted ornaments on the pulpit and wooden faces. The mosque's pulpit is also ornate as it faces the mihrab. The pulpit is made of plaster painted pillars and decorative window-like openings, and its transition to the wall is triangular overlays. Patches of wood are used for decoration on the entrance door with two wings in a carving technique called 'künde kari'.

An earthen branch, which is the main measure of a mosque, was later covered with tiles by making a roof. The General Directorate of Foundations rebuilt the western wall when they restored it in 1968.