Dara Ancient City is 30 km south east of Mardin, Turkey and was established in the 6th century AD. Historically named Anastasiopolis, this ancient city of Upper Mesopotamia is one of the most famous in the region.

The ancient city of Dara is spread over a large area of 9 km and mostly carved into rocks. Around the city, visitors can see cave houses carved into the rock. Additionally, a church, a palace, a bazaar and related storage facilities, a dungeon, cannon foundry and water aqueduct are still extant. The history of these structures dates as far back as Late Roman-Early Byzantine periods all way to present day Seljuk-Ottoman empires. 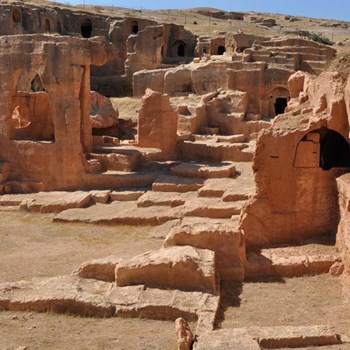 There is a necropolis on the left side of the road as you enter the city. The tombs were carved into the limestone rocks and range from simple to ornately decorated depending on what level your family can afford to exist in for eternity.

The remnants of many historic buildings are located near the dried up bed of a river, which banks are connected by a bridge from the Byzantine period. On the opposite banks stand what remains of city walls and towers.

The biggest attraction of Dara, however, are the remains of huge water cisterns. Some of them are hidden underground, and access to them is possible but difficult as you need to find the holder of the keys. Opposite the local tearoom, there are more cisterns, clearly visible and only partially covered by a roof.

The biggest attraction in Dara are the remains of huge water cisterns, some hidden and reached with difficulty. Opposite the local tearoom, there are more perfectly visible cisterns only partially covered by a roof.

The ancient city of Dara, dating back 2300 years, one of the most glorious settlements in the region of Mardin. The Romans left behind intriguing rock tombs and churches as well as cisterns and plenty more.