The Clandras Bridge is a historically significant bridge from the Phrygian period in Karahallı district of Uşak province. 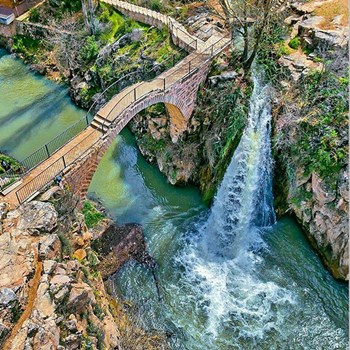 The bridge was built over Banaz Stream about 2,500 years ago and has two ends that sit on rocks at the half-way point up the mountain. It is 24 meters long, 17 meters deep, and 1.75 meters wide with large stones that were firmly clamped together using mortise joints to hold belts that include intricate pulley systems.

The bridge was built with the thrust technique on a fixed rock consisting of two main bodies that are called elephant feet. There is no trace of what it was used for, but due to the movement of one keystone, it has been repaired in recent years and lost its original dated look.

Next to the bridge is the Karahallı Power Plant. The water discharged from this plant is then poured over a concrete channel where it falls about 17 meters into a river.