The Cifte Minareli Madrasah (Double Minaret Madrasah) is located in Sivas city center and was built in 1271 by Ilkhanid Vizier Semseddin Cuveyni. In the same year, two more madrasahs, Gökmedrese and Bürüciye Medresesi have also been completed. These buildings altered the skyline with their large public complexes. 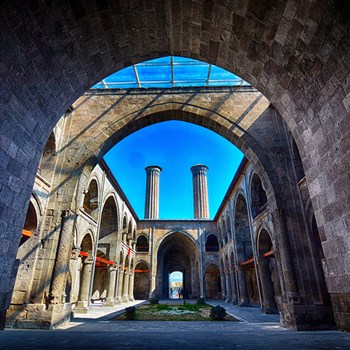 The monument was built in 1271, but only the east wall remains today. Excavations show that it's a monumental building with an open courtyard and four iwans. The entrance gate is decorated and has two minarets with one balcony, whose spires have fallen. Above ground level on both sides of the gate are decorative walls which are high and majestic.

The Madrasah represents one of the most important stone, brick and tile art works in Anatolia. The stonework decoration on the facade indicates an architectural maturity in terms of ratio as well as a lack of repetition from figure to figure. This application reveals understanding of facade design which is livelier, active and more conducive for creating chiaroscuro. In addition to competing with stone, the two minarets are also ornamented with glazed bricks and tiles that have been colored using mature compositions.

With 9 other same period madrasahs in Turkey, Cifte Minareli Madrasah has been added to the Tentative List of UNESCO in 2014 with the title of "Anatolian Seljuks Madrasahs".