Chrome Valley, located in a pivotal location since ancient times and the site of important settlements such as İmera and Horsetail during the same time period, is today a perpetual center of attention. Krom Valley hosted thousands of people centuries ago due to its rich mineral resources.

There are 15 registered churches and chapels in the region, as well as an arch bridge and castle. The stone houses from the Greeks still preserve their originality. 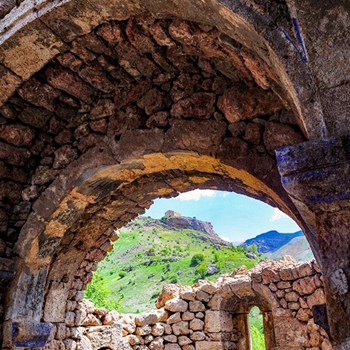 Although there is little detail about the region over time, research has revealed that the people in Chrome Valley before Ottomans converted to Christianity and eventually forgot their original language. The Christian community was moved out of the area during a population exchange in 1920s but they kept Christianity alive until then.

The way of living for the people living in Chrome Valley was not interfered with till 1700s. Islam started to be offered as a privilege to Christians of the area if they became Muslims and many were converted to Islam back then.

The emperor granted freedom of faith to all people in 1856. After this date, the Christians set about repairing their ruined churches and building many new ones. The region's high altitude and clean air make it a favorite summer refuge for nomads from the surrounding provinces.

The people living in this region have been able to ensure that the historical monuments remain intact and well-kept . One of the few churches still with a roof intact is located here. With its untouched nature, even though it has carried on for centuries, this region deserves protection and special attention.