Çeşmeli Church (Surp Asvadzadzin Armenian Church) is located in the Tapucak District in the center of Karaman. Tapucak District, one of the oldest neighborhoods of Karaman, is a neighborhood where Armenians and Greeks lived together with Turks before the First World War and the population exchange. 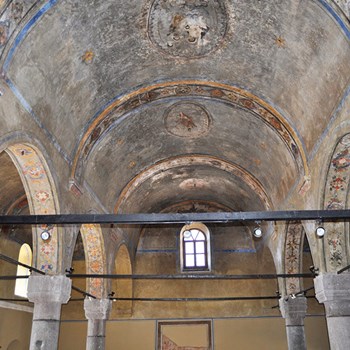 In roughly every thousand meters, there is something to see - Byzantine-style Çeşmeli Church, Ottoman-style Yeni Hamam, Karamanoğlu-style Araboğlu Mosque with Turkish houses next to them ; then there are Armenian houses built in an European style; you will find Greek houses after that.

The Çeşmeli Church is an example of the small basilicas found in Binbir Church in Karadag area. It is not known exactly when it was built, but it is thought that it belongs to 17th or 18th century with this shape. The church consists of three longitudinal naves and is made of cut stone. Its original shape belongs to the Byzantine period but was used as a prison until the 1980's. Some additions were made to it within these last decades, preserving its exterior architecture.

The building used for the Ministry of Culture and Tourism was restored in 2007. The church, which is now open to visitors, began hosting various activities such as exhibitions, meeting rooms, and music concerts after its restoration.