Cemil ChurchPlaces to Visit in Nevsehir

Cemil Church, consecrated and opened in 1882 by Archpriest Paisios, is called the "Holy Cross Church" because it is dedicated to the Holy Cross. It is at the entrance of Cemil village, which is 15 kilometers from Ürgüp and 38 kilometers from Nevşehir. Considering that the construction of this Ottoman-era church started on May 21st - Constantine and Helena's special day when Christianity became Rome's official religion--it was opened for worship shortly after on the same year. 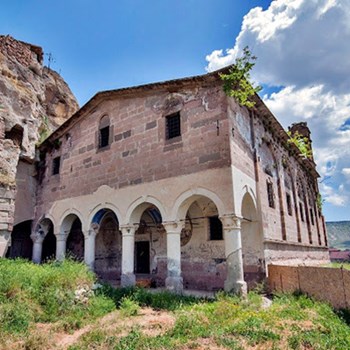 It is 24.5 meters long and 14.5 meters wide and has a basic plan with cradle vaulted roof at the entrance to Cemil Village which draws attention with its smooth stonework leading to a two-storey solid bell tower right before it. There is an old chapel carved into the rock in the north east of the church, both sides of which have paintings each with their respective dates written below them; 1913 on one side and 1914 on the other.

Six arched columns can be found in the Nartex of the church. These pillars are usually seen in Byzantine churches and separate the central part of where you worship from the outer ring. In 2014, Ferner Greek Patriarch Bartholomew held a service just off this site.