The hospital, which was destroyed due to being made of rubble stone, was built in 1235 by Çankırı Atabeyi (Governor) Cemalettin Ferruh during the reign of Anatolian Seljuk Ruler Alaeddin Keykubat I. 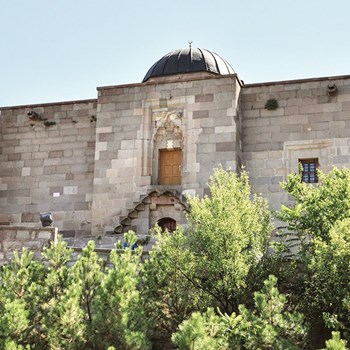 Cemalettin Ferruh had both a mosque and Dâr-ûl Hadis built in 1242. The work, the first of its kind in Anatolia, is known by locals as Taş Mescit for its architecture as well as two noticeable plastic works of art. The first piece, which is used as a "Medical Symbol" today, in which two entwined snakes are depicted from two figurative stone works, one on the structure and the other in Çankırı Museum as sculpture. In the second piece exhibited in Çankırı Museum, there is a snake figure entwined in a cup, which is used as a "Pharmacy Symbol" today.

There are also two burial chambers in work, which is a mausoleum. A sarcophagus can be found in the burial chamber on the north façade, and five cists can be found within the east façade's two-section room. It is estimated that corpses known as cadis (mummified corpses) were used during this time period. One of these coffins is thought to belong to Cemalettin Ferruh, founder of the work; his coffin was placed above where many people would consider main place, or above the central chamber."

The building, which is still used as a mosque, served as a Mevlevihane for many years until the establishment of the Republic.