Çayönü is a mountain pass that is located in the settlement of Ergani Valley, an excavation site with over 6,000 sq. m. of floor space.The first scientific research of the Çayönü site took place in 1962, with Halet Çambel and Robert J. Braidwood initiating excavations.

A small part of the excavation site has been arranged into a museum in the years 1990 and 1991. When digging resumed in 2015, the Outdoor Museum was enlarged with modern promotional opportunities that would provide visitors an opportunity to understand historic relationships between settlements and Hilar Rocks and to explore how pottery is a symbol of prehistoric society's life style. Çayönü is historically important for the transitional period of its 3,000 years from 9,300 to 6,300 B.C.; during this time there was movement away from hunting and gathering to sedentary lifestyle and animal husbandry. The long term settlement upheld the environment, but utilized it in all ways provided by the environment to find solutions against environmental destructions with their own myths.

The architectural history of Çayönü is important because they solved many common problems. For example, single-floor square structures had stone basements and circular pothole shelters were constructed from wattles or reeds. Furthermore, the foundations of traditional Anatolian village architecture was laid.

Terrazzo is the oldest type of mosaic tile, and it's made by baking lime. The 400 people buried in Kafatasli Yapı (Skull Building) are representative of ancestor/death cult, and Flagstone Building demonstrates tradition chamber tombs. Placa with a size of 60 x 20 m rests finely on tall rectangular steles. 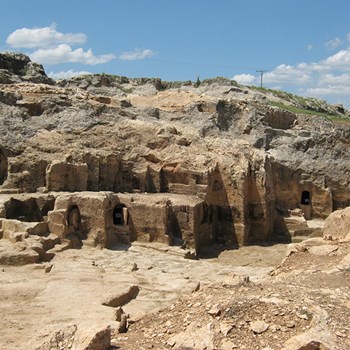 In addition to producing beads and various pieces of ornamental jewelry, Çayönü also workshops can be used for other purposes such as the production of needles, scrapers, stone drill bits for drilling holes in rock.

Multiple types of beads and similar objects made from various materials were found in graves such as different stones, teeth, and shells. The fact that people favored curving to settling on a technique is evidence that they preferred custom-made or exchange methods over in-settlement production.

Types of archaeological finds related to fabric production show that textile making was an important occupation at this time. Needles and thimble sets rich in bone demonstrate the intensive sewing activity during these times.

The excavators found in Çayönü, which cannot be identified yet, is also peculiar to this region. Various kinds of excavators such as stalked excavator, knives, pencils, various drillers and ends were used on tools made from flint stones and obsidian material in the settlement.

The horn hooks, milling stones, grinding stones and beetles found at the site prove that cereals and pulses are a very important contributor to vegetable production. Stone diggings show that agricultural activities were taking place alongside gathering items. There are several stone tools at the site such as stone cannons, channel stones and flat-hole stones.