Cavustepe is an ancient fortified site in Gürpınar district of Van Province that was used by Urartian kings as a fortress during the 8th century BC.

The fortress is situated on two hills at the western end of Bol Mountain, which rises in the middle of a fertile plain. The fortress extends 1 km. and it was protected by strong walls branching from east and west directions. 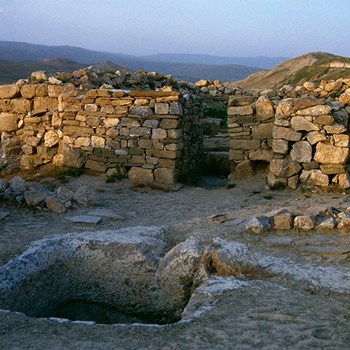 The Upper Fortress and Lower Fortress are the two parts of the castle. There is a square-shaped portico temple dedicated to Khaldi, the Urartian chief deity, adjacent to the northern part of the Upper Fortress which contains religious places associated with it. The smaller Lower Fortress has a rectangular plan in an area that is less expansive than that of the upper fortification and is surrounded by walls that are strong.

The Lower Fortress on the west side is 430 meters long and 125 meters wide. On the eastern side of the Lower Fortress there is a rectangular building named Uçkale. It has plan dimensions 27.50 meters x 17.30 meters, which makes it unique for Urartian architecture. One interpretation of Uçkale’s function is that it was used as a temple instead of a fortress - unlike other typical Urartian fortresses that were built haphazardly with less skillful construction techniques seen in this building (despite its main function not being known).

There is a palace that was built during the reign of King Sarduri II in 764-735 BC. The lower section was built around the 7th century and included a temple, a king's tower, workshops, storehouses, cisterns, and even a harem. While the fortifications were destroyed in the 7th century, evidence of later occupation during the medieval era is apparent. Today, the buildings have a semblance of shape and visitors are able to explore how people would have worked here. The view is fantastic as well.