Cavusin VillagePlaces to Visit in Nevsehir

Cavusin Village is located between the towns of Avanos and Goreme, in a valley which has gradually become wider. The village contained many Christian Orthodox families by the beginning of 20th century.The houses were actively used until 1924 when the population exchange happened between Greeks and Turks. All Turkish Muslims citizens in Greece had to move out from Greece while about 1.2 million Christians left Turkey because of the same population compulsory according to officials.

The people coming from Greece were taken into the homes of Greek villagers who left their villages. As there were fewer immigrants to the village than local residents, most houses sat vacant and unoccupied. Unfortunately, these abandoned houses faced decades of neglect as no one was around to repair them as they stood unused on the outskirts of town. The government eventually evacuated the entire village in 1950s after a landslide due to falling rocks. The government evacuated the entire village and subsidized the new houses on the safer plateau area. 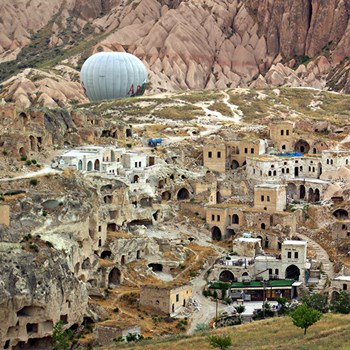 Houses in the village are cut into rock formations and many of their insides have been eroded by natural forces, such as rain, wind, and earthquakes. You can climb to the top of the village through a twisting path that offers panoramic views of Red Valley and Uchisar Castle. There is also a church called Saint John the Baptist from the 5th century atop the village. This church is the second oldest in Cappadocia, and has painting that survived ruthless erasures; this is unique fresco of "The Murder of St. John."

The other church in Cavusin Village, Nicophoras Phocas, is one of the best protected churches in Cappadocia . This church has almost all the life of Jesus on paintings and in pretty well-protected form. The church has been built after the order of Byzantine Emperor, Nicophoras Phocas, when he visited Cappadocia in 960s. The church is dating back to around 965 and has the painting of Nicophoras and his family as well.

Some of the scenes at this church are: Annunciation, Visitation, Proof of the Virgin, Flight into Egypt, Joseph's Dream Ii, Blessing and Mission of the Apostles, Adoration of the Magi, Massacre of the Innocents, Pursuit of Elizabeth, Killing of Zacharias; on the west wall are Entry into Jerusalem, Raising of Lazarus, Healing of the Blind Man, Descent from the Cross, Women at the Tomb; on the wall of the apse the Transfiguration; on the north apse Emperor Nicophoras Phocas and his family.