Cape Jason and ChurchPlaces to Visit in Ordu

Cape Jason dates back to ancient times, when a temple to the seafaring hero Jason resided on the edge of Black Sea. A church later replaced it with similar missions. Nowadays, Cape Jason stands alone in a corn field next to a lighthouse overlooking the waves of Pontus. 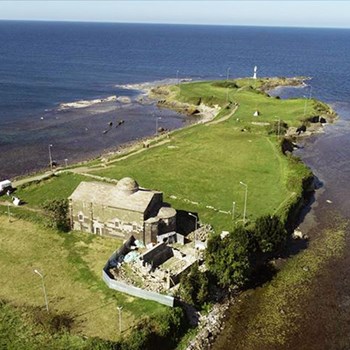 Cape Jason is perched on the edge of Çaytepe village in Perşembe County and looks out over the Sea. The site is currently classified as second degree protection, with old religious sites like a church and parts of its walls still standing. There are also ancient ports from before Christianity which may have been used for fishing purposes.

Jason church is said to be one of the oldest churches in Turkey. The current building was built on top of an ancient temple, dating back 1868. Over time it has faced severe damages and only recently (2004) rebuilt and reopened for public visit.

The best part of this church is its location, which makes it near the sea. It is said to be the perfect place to watch sunrise or sunset, and its contrast in dark and light colored stones adds to that image.