Capanoğlu Mosque is in a central part of Yozgat city. The mosque, which is popularly known as the Great Mosque or Ulucami, is one of the important examples of the Turkish architectural style that emerged under the European influence during Ottoman Empire Period. 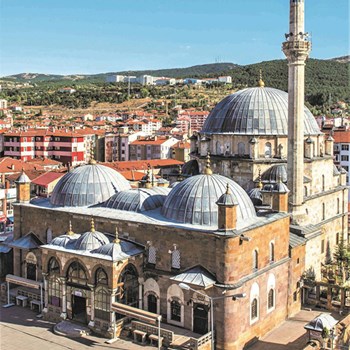 The southern section, which constitutes the interior mosque of the building and was built around 1193 (1779), is attributed to Çapanoğlu Mustafa Bey. The north side addition called "exterior mosque" was completed in 1208 (1793-94) by his brother Süleyman Bey as can be deduced from its inscription on the middle door opening to today's entrance portico.

The four sides of the mosque are surrounded by an enclosed courtyard. In 1964, a third door was added to the north side of the monumental arched doors on the east and west sides of the courtyard. Intense hand-drawn decorations are seen in both inside and outside sections of this mosque. Marble imitation paintings covering where eyes would be can be found throughout not only above floors but also above exterior walls, archways, and surrounding areas.

Made from branches, leaves, flowers and fruit depictions inside the main dome and pendentives of the mosque; these ornaments are striking.

The first entrance to the building, which is at the main harem from the outer mosque, creates a rich and magnificent composition. Acanthus leaves are used as well as C and S folds. Seashell motifs are on top of an altar that crowns it while there's a pulpit decorated with colorful veined marbles in various shapes with baroque motifs. With its interior decoration and architectural elements, this building is among the best examples of baroque art in Anatolia.

The Çapanoğlu family has a tomb located in the northwest corner of the complex, which is entered through an arched door and contains 18 sarcophagi.