Çanlı (Bell) Church Ruins and CavesPlaces to Visit in Aksaray

The church was established in the 900s and peaked through the end of 11th century. However, it declined once Seljuk Turks arrived in the region around 1100s. 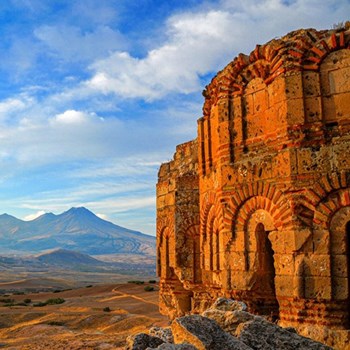 Çanlı Church is one of the largest and best preserved stone-built churches in the region. The 11th century church has beautiful architecture and a historical setting that is unmatched by any other building.

The original Byzantine church is the expansive cross-in-square nave (9m x 9m) with 3 slits in the apses. Four pillars supported the massive central dome which was 4.5 meters wide and 16 meters high. The tall 12-sided drum had 4 slits for interior illumination and a flattened cap at its top. The dome collapsed during an earthquake in 1950s.

The remaining frescos are of professional craftmanship. The naos paintings recount miracles scenes from Christ’s life, and were created some 200 years after the original church was erected. 200 years later in 1250 AD, a second parish church (paraekklesion) was added on the northern side but it has been buried under a landslide.

There are more than 25 large, rock-hewn settlements around Çanlı Church. These independent but adjoining dwellings span one kilometer in length and exist as isolated residences that provide shelter for their inhabitants.

The elaborate architecture pointed to the courtyard's being inhabited by a prosperous community that was affiliated with Akhısar, which is visible 4 kilometers away. These courtyards were very lavish with an elite guard providing extravagant care and high-class horse stables for thoroughbred horses. From these, we can think that Canli Church and surrounding was not a monastery, but rather a residental area.