Cal CavePlaces to Visit in Trabzon

Çal Cave is one of the most visited attractions in Trabzon. Çal lies at an altitude of 1,050 meters above sea level and can be found in Düzköy district.

Cal Cave is accepted as the second longest cave in the world and it attracts people with its' stalactites, stalagmites, streams, waterfalls and ponds. 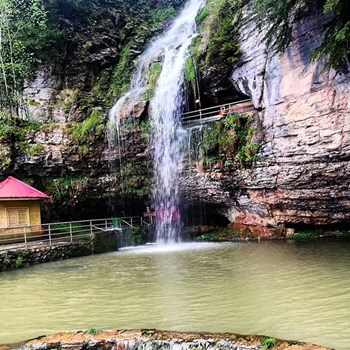 There are 2-kilometer walking routes, streams, waterfalls and ponds in the Çal Cave. The deeper spots reached with stalactites and stalagmites is believed to be particularly beneficial for people who suffer from asthma and shortness of breath.

The cave is split into two sides when it's around 200 meters from the entrance. The left side route that consists of a 150-meter path and the other side, on the right, containing a 400-meter long course. A huge fault line in the ceiling can be seen at which visitors stop at to take photos but parts still need exploration. Estimated 8 million years ago for forming this colossal structure with its beauty unseen by us humans for so many ages.

There is a lake and waterfall at the 60th meter of the long arm. Water from the doline flows from the chimney at the end of the small arm. The accessible area in this cave, both arms to which are paved with wooden walkways, is 8 kilometers.