One of the historical structures in Kırşehir, Cacabey Astronomy Madrasah was built by Nureddin Jibril bin Cacabey who was Governor of Kırşehir during the 1272 period as a madrasah where science, astronomy and math education were provided.

Most notable among the architectural features of Cacabey Astronomy Madrasah are its peculiar colonnettes representing planets in our solar system; a large observation shaft topped with a torch that provides light to study at night; and an observatory tower designed for visiting astronomy classes. 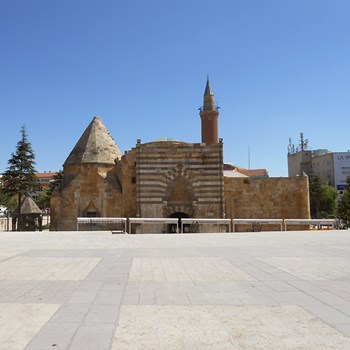 The rocket-like colonnettes which are situated at three different points of the madrasah, which is currently used as a mosque are evidence that it had been an astronomy center in its heyday. The most remarkable parts of the architecture are the columns located on the outer corners.

Three interconnected columns are believed to represent the phases of firing and launching rockets. Coloured crown Gate, one of the best examples of Seljuk Anatolian decorative arts looking as if painted by a master embroiser with his soul, reflects his secrets through it.

The observation tower is located on the southwest facade of the building and at a height of 21 meters. The upper part of the tower features zigzaggy decorations, while plain decorations are visible at its lower part. Between these different parts lies turquoise tiles which can be seen when passing by it quickly.

At the center of the courtyard, there is an observation well where astronomical studies are performed. A light lantern placed just above it. There are also 8 student rooms built for education located on the corners of this main hall. The columns in between these cones and spheres represent planets in our solar system.

Cacabey Astronomy Madrassa which is one of our ancestor's sacred relics that still stands with its magnificence and mystery was included on the UNESCO's Temporary World Heritage List in 2014.