Buruciye Madrasah, located in Sivas city center, is one of the most important buildings from the era of Anatolian Seljuks. This madrasah was ordered to be built by Muzaffer Bey, under the rule of Gıyaseddin Keyhüsrev III, son of Hibetullah Burucerdi in 1271. The architect is unknown and it had been used for long years to teach positive sciences.

Buruciye Madrasah is based on the quadrilateral plan scheme, four iwans and an open courtyard. The rooms are covered by barrel vaults and surrounded by column porches. It occupies a vital position among Seljuk Anatolian madrasahs due to its symmetrical plan scheme. 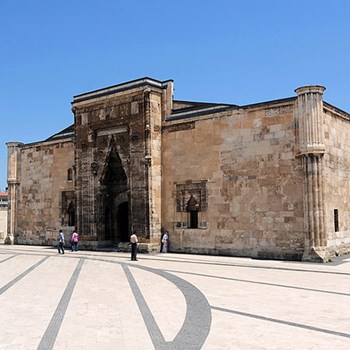 The masonry is concentrated at the entrance. Patterns resembling a lacework are carved in its stones. Similar patterns can be seen over the tomb on the left side of the entrance iwan, belonging to Muzaffer Burucerdi whom ordered to build this mosque. The entire dome is adorned with rich tile ornaments.

Among the madrasahs with open courtyards, Buruciye Madrasah is one of the best examples and has very compatible architectural elements. Its architectural integrity is outstanding and it also can be expressed as a synthesis of the madrasah with iwan that developed during Seljuk era in Anatolia.

The building has walls that are 115-150 centimeters (45-59 inches) thick depending on their position, with the main iwan resembling a lacework. The main portal's muqarnas is decorated with geometric figures and the outflow crown gate is surrounded by inscriptions. The dome in the back of the main gate is assumed to be a mosque, and it contains an mihrab.

With 9 other same period madrasahs in Turkey, Buruciye Madrasah has been added to the Tentative List of UNESCO in 2014 with the title of "Anatolian Seljuks Madrasahs".