The Grand Mosque (Ulu Camii)Places to Visit in Bursa

One of the most iconic buildings in Bursa is Ulu Cami, or as some call it, "The Grand Mosque." Built by Yıldırım Bayezid in 1396-99 following his victory at Nicopolis the previous year, this mosque was proposed as a symbol to show how grateful he was. There are 20 domes in this mosque. The 20 domes were supposed to represent the 20 masjids that Yıldırım Bayezid had planned originally for the city, but Emir Sultan (his mentor) recommended that he should build only one in an excellent way.

This mosque became the largest example of multi-domed architecture within Ottoman style. It is one of the holiest sites in Islam by scholars, who rank it fifth among other holy places including Mecca, Medina, Jerusalem and Damascus. 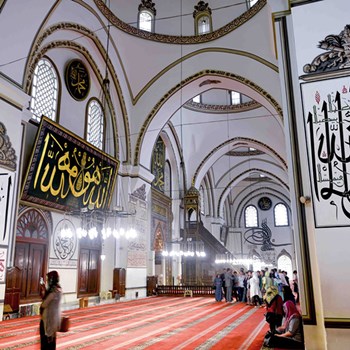 Bursa Grand Mosque has a rectangular plan and three doors, one at each of its eastern, western, and northern façades. The grand door in the mosque's northern facade is more elaborate than the mosque's other entrances; it is made of marble.

This mosque has 20 domes of 11 meters in diameter each, and they are supported by pendatives and arches. It also has 12 pillars which run the length of the mosque's square-shaped inner walls, with a 17x17 meter central dome covered in glass. Beneath this dome, there is a fountain for washing hands before prayer, made up of 16 different compartments for wadding water.

The interior of this mosque is decorated with 129 writings by notable calligraphists such as Abdulfettah Efendi, Mustafa Izzet Efendi, Sami Efendi, and Sheik Effendi.The letters of these writings are examples of different calligraphy styles. They contain the 99 names of Allah, written in "celi sulus" and "kufi" script on all the pillars. There is also a caligraphic writing that was done by Sultan Mahmud II.

The pulpit of the mosque is made in "kundekari" technique without using nails or any other joining elements. Therefore, it has the character of an artwork. It was built by Hadji Muhammed bin Abdulaziz bin Ibnu’d-Devaki. Eastern and western reliefs on the pulpit represent solar system and Milky Way galaxy respectively, while the epitaph board over door of pulpit affirms that this mosque was constructed in 1399 by order of Yıldırım Beyazid. When you step into the mosque, you can see many vav ‘و’ shapes with tulip designs in every corner, symbolizing Allah (cc) God.